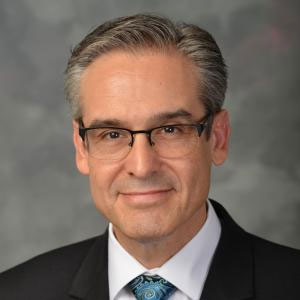 Alfred Sanchez is the president and chief executive officer of the Greater Miami Chamber of Commerce, South Florida’s first and the longest-sustaining business development organization and one of the largest chambers in the southeastern U.S.

In this role, Alfred directs a team of chamber professionals, supporting more than 400,000 employees of chamber member companies in South Florida. His involvement with the chamber spans more than 25 years and includes serving on the board of directors, chairing the Marketing Committee and Leadership Programs Group, and serving on the Nonprofit Committee. He attributes much of his success in South Florida to his deep involvement with the chamber.

Previously, Alfred served in a variety of leadership roles with the American Red Cross. Most recently, he was the regional chief executive officer for its South Florida region, where he led a team of over 3,000 volunteers and staff, supporting almost eight million residents across 13 counties to prepare for, respond to, and recover from natural and man-made disasters.

Before this, he led the YMCA of Greater Miami as president and chief executive officer. During his 12-year tenure at YMCA, he expanded its financial development and led strategic planning initiatives that culminated in the opening of three new Family YMCAs. These were the first facilities built by the Miami YMCA in 40 years and substantially increased the organization’s reach to thousands more community members.

Alfred also served as director of government and community relations for Royal Caribbean Cruises and Celebrity Cruises. In this role, he oversaw the charitable programs and helped implement the company’s mission to enhance communities throughout 160 international ports of call.

Alfred received a bachelor’s degree in psychology and English from Beaver College and a master’s degree in community and clinical psychology from the University of Maryland. Active in his church and in the Miami community, he serves on local and national boards including Greater Miami & the Beaches Resilient City Steering Committee of the 100 Resilient Cities—Pioneered by the Rockefeller Foundation; The Beacon Council; Greater Miami Convention & Visitors Bureau; Orange Bowl Committee and Great Commission Alliance Board, serving the people of Haiti.